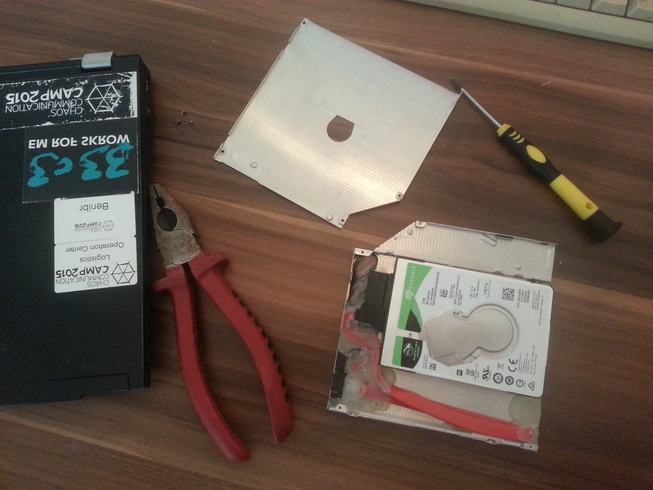 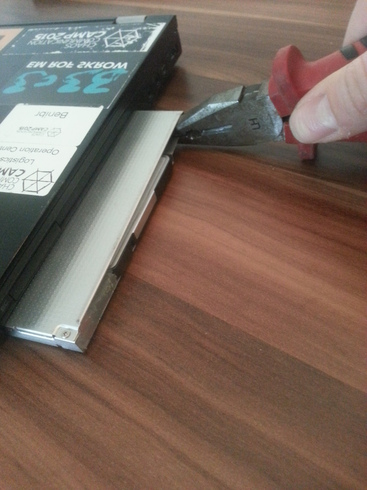 Once I bought a Lenovo Thinkpad Edge, can’t remember the exact number, but I selected the small CPU and it was so slow, that I smashed it one day so that the display was broken. What a relief! Afterwards my flatmate gave me a Dell Latitude E4300 which I used approximately from 2014 to 2018 and besides it was also very old I was very happy with it. This thing was unbreakable and a good companion!

Cause I didn’t had the money to buy big SSDs at that time I had only 120GB SSD in the only SATA slot. But the thing had a DVD tray which I never used so it was very obviously to remove this and replace it with a HDD for slow and cheap storage. But I could afford that either, all I could by was a 1TB 2,5” HDD (7mm) which fit in the slot. So I decided to build the HDD tray myself.

I pulled out the DVD tray and removed everything inside and just kept the cover and groundplate. The HDD fit in the hight exactly but the connector was a [https://de.wikipedia.org/wiki/Serial_ATA#Slimline_SATA](SATA Slimline connector) which is quite common for CD/DVD trays. Since buying adapters would have been already way to convenient I tried to build one.

Because I don’t wanted to solder SATA cables and connector I cut out the datapin connector from the Slimline connector from DVD tray and used a SATA extension cable which has a male connector to replace it. They didn’t fit really good so I had to cut them down a bit and fixed them with as much hot glue as possible. Then I always had to fumble the whole thing inside the DVD tray to test if the connector fits. Without seeing anything inside this was a very annoying hour.

But finally I had a working Slimline connector, soldered powercables to it and glued everything together so that I can connect the harddrive. In comparison to the Slimline connector this was easy even if the SATA cable was very rigid.

Then I tried the whole thing and voila, the SATA disk spun up and was recognized by the system. Well done, I thought. But damn the SATA cable had to be turned in order to get the connector into the right orientation and it turn out that width of the cable didn’t fit hight of the tray…

So I pulled i out again and made a cut right in the middle of the cables isolation between the wires pair. Of coarse I practised this before with another SATA cable. And finally the whole glue blob fit inside into the tray :-) 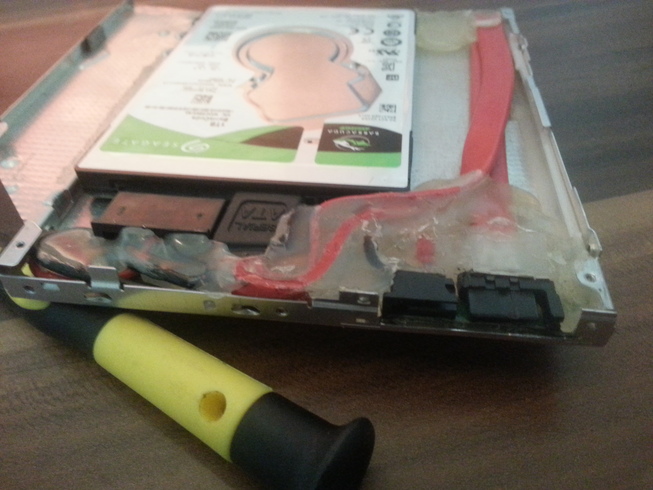 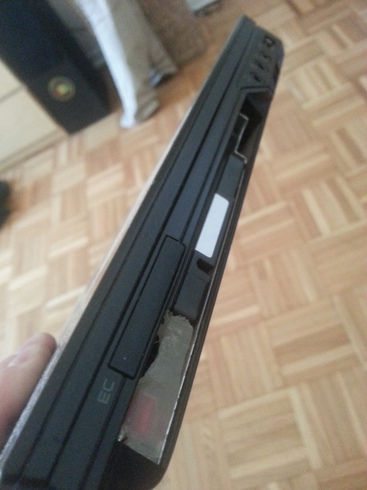